Bottom Of The Sky

by Bow Thayer and Perfect Trainwreck 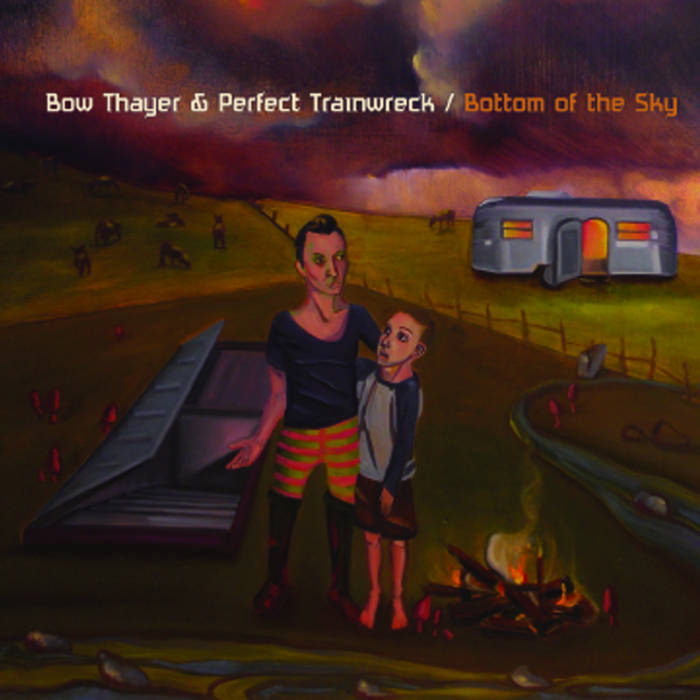 This latest record from Bow Thayer and Perfect Trainwreck started back in July of 2009 at Levon Helm's Barn in Woodstock NY. It can easily be considered a follow up to the first Perfect Trainwreck album in that it was recorded pretty much the same way and at the same studio. Live! All the guys sitting in the same room with Producer/engineer Justin Guip, playing the music start to finish at the same time, with little or no isolation. You could say it was done old school. This time the group allowed some vocal overdubs, in lieu of digital editing and pitch correcting, which was engineered by Ben Grotto at Mad Oak studios in Allston Massachusetts.

"Buffalo Joe" A song alluding to Joseph Campbell and an urgency for a modern mythology was the first song recorded and was the working title up until recently. After hearing the record in its completion and viewing the painting done by Portland Oregon Based artist Alexis Mollomo, for the front cover, "The Bottom of the Sky" began to define the project.

The record shows how grounded the band has become stylistically while also opening the doors to new possibilities in music to come. The title represents where the band is now, planting their roots, growing down, but accepting that the sky is the limit and that this is a good starting point. The band had a wonderful experience making this record, every step of the way was an almost effortless joy, and we hope you will get that sense when you listen.